This What’s New Wednesday is packing a punch. Just released today and already Number 1 on the LGBT Sci-Fi bestseller list at Amazon. “Impact” is a collection of flash fiction stories all revolving around the theme of Impact. My entry made it into the book, so now you have two good reasons to get your copy today.

1) One object colliding with another

3) An influence or effect on something or someone

4) The force of a new idea, concept, technology or ideology

Four definitions to inspire writers around the world, and an unlimited number of possible stories to tell, but only 110 made the final cut.

A difficult choice to be made. An object hurtling recklessly through space. A new invention that will change the world. So many things can impact a life, a society, or a planet.

Impact features 300-word speculative fiction ficlets from across the queer spectrum from the minds of the writers of Queer Sci Fi.

It’s hard to tell a story in just 300 words. Each year we ask writers to take the challenge, turning in stories across the queer spectrum. The rules are simple. Write a complete sci-fi, fantasy, paranormal or horror story, include LGBTQIA characters, and do it all with just 300 carefully chosen words.

Since this book is composed of stories of no more than 300 words, we can’t really do a standard excerpt, so we’re offering you the teaser first lines from some stories.

“The mallet’s impact on the hard, bright disk shattered the silence in the talking chamber. The resulting deep tone reverberated through the vault, through Saskia, as she fidgeted beside her lover.” —Settled, by Aidee Ladnier

“This is how the world ends, or so they say. From where I’m standing, it simply looks like a rolling darkness as distant lights flicker and die.” —Visitors, by LJ Phillips

“’What have you done?’ The mechanical eyes came to rest on his face, the droning beep sounding loud in the small room.” —Identity and Change, by Jo Tannah

“’Once upon a world, we were the same,’ he said, lifting my hand to his lips; the ground shaking beneath us.” —Impact, by Jack Ladd

“I been a tinker and soothsayer long enough to know this country’s at the cusp of war. They stir up hate easy as breath. And, oh, it pains my soul to see it. “ —Impact of Intervention, by Patricia Scott

“All lives begin with a messy impact of some kind. The crash of zygotes and gametes. Splats of silica gel between cybernetic synapses. Two women slam into each other carrying full cups of coffee.” —Quintessence, by E.M. Hammill

“If I venture far enough into the house, I’ll find my closet.” —The Closet, by K.S. Trenten

“It touched Ligaya when she was a child. Or she touched it. A half-glimpsed shape under her bed.” Mas Mabuti An Answang, by Foster Bridget Cassidy

“Jam zipped down the neon track, feather-light in low gravity. She rocketed forward, a glowing haze in her starred helmet, and shot past the pack. “Space Jammer!” echoed as she neared the line. Time to rack up the points.” —First Bout: Andromedolls Vs. Crotch Rockets, by Ginger Streusel 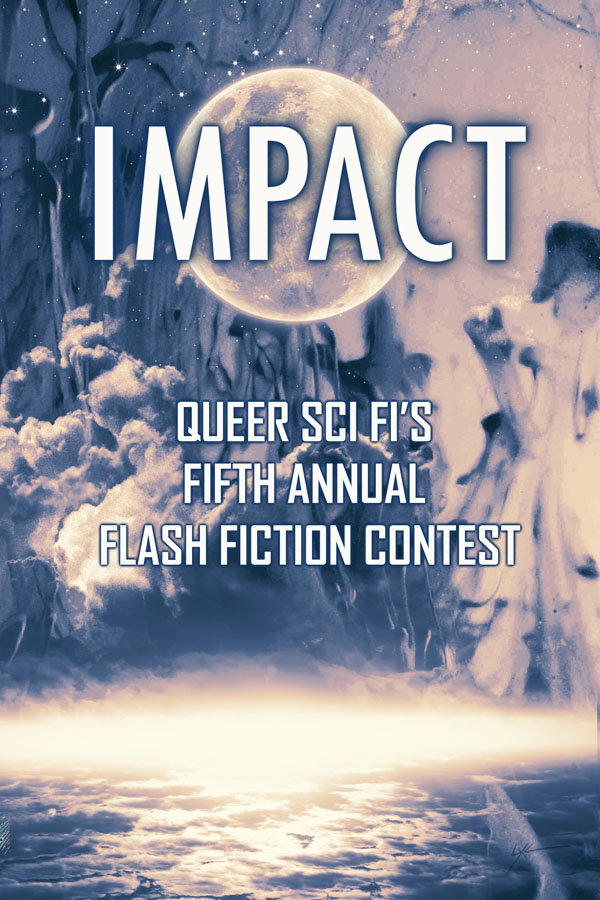 Queer Sci Fi is giving away a $25 Amazon gift card with this tour – enter via Rafflecopter for a chance to win:

At Queer Sci Fi, we’re building a community of sci fi, fantasy, paranormal and horror writers and readers who want a little rainbow in their speculative fiction. We run a great discussion group on Facebook, a twitter feed, and have a website full of useful materials, news, and announcements for readers and writers of queer speculative fiction.